Well booklovers, it’s been quite some time since I posted some recommendations, and I’ve read a number of very good books in the past few months! It had been awhile since I read much new science fiction, so I set about ticking a few of the books off of that list – although most of them were more science-fantasy than strictly science fiction.

One of the books that had been on my list for ages was Gideon the Ninth, by Tamsin Muir, as it was nominated for a bunch of awards. This was a very fun read (exploring a haunted gothic castle in space? yes please!), and was adjective-tastic. Gideon is a great snarky protagonist, and I highly recommend this quirky science fantasy book. This is the first in a trilogy, the first two of which are out. 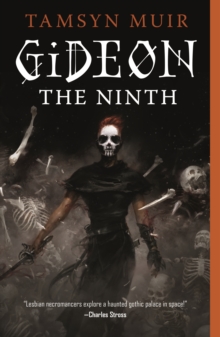 The Ninth Necromancer needs a swordswoman. Gideon has a sword, some dirty magazines, and no more time for undead nonsense. The first in The Locked Tomb Trilogy, this book unveils a solar system of swordplay, cut-throat politics, and lesbian necromancers.

Her characters leap off the page, as skillfully animated as arcane revenants. The result is a heart-pounding epic science fantasy. Brought up by unfriendly, ossifying nuns, ancient retainers, and countless skeletons, Gideon is ready to abandon a life of servitude and an afterlife as a reanimated corpse.

She packs up her sword, her shoes, and her dirty magazines, and prepares to launch her daring escape. But her childhood nemesis won’t set her free without a service. Harrowhark Nonagesimus, Reverend Daughter of the Ninth House and bone witch extraordinaire, has been summoned into action.

The Emperor has invited the heirs to each of his loyal Houses to a deadly trial of wits and skill. If Harrowhark succeeds she will be become an immortal, all-powerful servant of the Resurrection, but no necromancer can ascend without their cavalier. Without Gideon’s sword, Harrow will fail, and the Ninth House will die.

Of course, some things are better left dead.

I’ve apparently gotten really into books that are a cross between science fiction and fantasy these days, as the next book on my list of recommendations also falls into the science-fantasy category – A Big Ship at the Edge of the Universe, by Alex White. This series is set in a pretty interesting universe, where (almost) everyone is born with magic of varying specific types, and the Origin planet that everyone descended from is lost to history. This is the first in a trilogy, all of which have been published, and is an ensemble-cast driven series, though the storyline is also pretty epic in its scope. 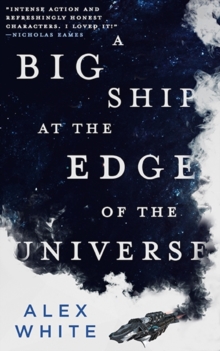 Furious and fun, this book follows a crew of outcasts as they try to find a legendary ship that just might be the key to savings themselves – and the universe.

Boots Elsworth was a famous treasure hunter in another life, but now she’s washed up. She makes her meager living faking salvage legends and selling them to the highest bidder, but this time she got something real–the story of the Harrow, a famous warship, capable of untold destruction.

Nilah Brio is the top driver in the Pan Galactic Racing Federation and the darling of the racing world–until she witnesses Mother murder a fellow racer. Framed for the murder and on the hunt to clear her name, Nilah has only one lead: the killer also hunts Boots.

On the wrong side of the law, the two women board a smuggler’s ship that will take them on a quest for fame, for riches, and for justice.

Alastair Reynolds has long been one of my preferred science fiction authors, and I finally got around to reading Revenger last month. I don’t know what I was expecting it to be about, but if I had realized it was about space pirates, with a pair of sisters as the protagonists, I probably would have picked it up sooner! This book felt very different from his Revelation Space series, but I loved it (possibly even more than Revelation Space), and was thrilled to discover that the third book in the trilogy had just come out in paperback, so I didn’t need to wait at all to gobble down the next two books for the conclusion of the story! 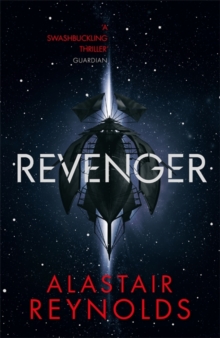 The galaxy has seen great empires rise and fall. Planets have shattered and been remade. Amongst the ruins of alien civilisations, building our own from the rubble, humanity still thrives.

And there are vast fortunes to be made, if you know where to find them . . .

Captain Rackamore and his crew do. It’s their business to find the tiny, enigmatic worlds which have been hidden away, booby-trapped, surrounded with layers of protection – and to crack them open for the ancient relics and barely-remembered technologies inside. But while they ply their risky trade with integrity, not everyone is so scrupulous.

Adrana and Fura Ness are the newest members of Rackamore’s crew, signed on to save their family from bankruptcy. Only Rackamore has enemies, and there might be more waiting for them in space than adventure and fortune: the fabled and feared Bosa Sennen in particular. Revenger is a science fiction adventure story set in the rubble of our solar system in the dark, distant future – a tale of space pirates, buried treasure and phantom weapons, of unspeakable hazards and single-minded heroism .