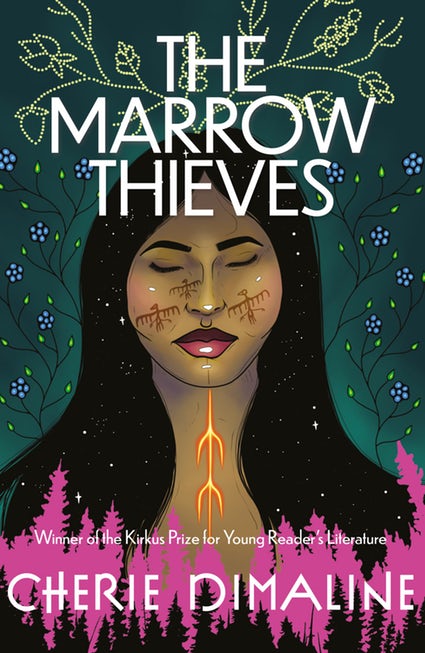 Just when you think you have nothing left to lose, they come for your dreams.

Humanity has nearly destroyed the world through global warming and now an even greater evil lurks. The Indigenous people of North America are being hunted and harvested for their bone marrow, which carries the key to recovering something the rest of the population has lost: the ability to dream. In this dark world, Frenchie and his companions struggle to survive as they make their way up north to the old lands. For now, survival means staying hidden – but what they don’t know is that one of them holds the secret to defeating the marrow thieves.

I picked up this award-winning novel by Cherie Dimaline because we had a few copies in the shop and it looked interesting, as I tend to like dystopias, but it is so much more than your typical YA dystopia. It draws parallels between a fictional dystopian future and the true horrors of the Canadian residential school system, a legacy of Canada’s colonialism which significantly harmed the Indigenous children forcibly sent there, whose repercussions continue today. This is a powerful book by a Métis writer, and it’s set in my neck of the woods, Ontario – or what’s left of it (“We were a few hours out from Southern Metropolitan City, which used to be Toronto back when there were still so many cities they each had a unique name instead of a direction.”). I highly recommend this book, no matter your age or country of origin. It is a must-read, and it moved me to tears.