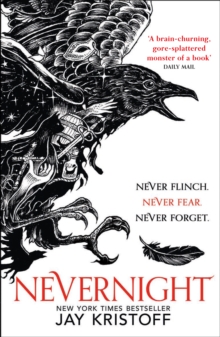 I just finished reading Godsgrave by Jay Kristoff, the second book in an epic fantasy trilogy, with the first being Nevernight, which was recommended to me by a customer in the bookshop and I loved it! It ticks all the boxes for me – some fun world-building (triple suns, hello), an interesting magic system, and a very compelling protagonist and story.

As it’s the second in a trilogy, I’m going to put the synopsis here for the first book, Nevernight, as you should definitely start there (synopsis from jaykristoff.com):

In a land where three suns almost never set, a fledgling killer joins a school of assassins, seeking vengeance against the powers who destroyed her family.

Daughter of an executed traitor, Mia Corvere is barely able to escape her father’s failed rebellion with her life. Alone and friendless, she hides in a city built from the bones of a dead god, hunted by the Senate and her father’s former comrades. But her gift for speaking with the shadows leads her to the door of a retired killer, and a future she never imagined.

Now, Mia is apprenticed to the deadliest flock of assassins in the entire Republic—the Red Church. Treachery and trials await her with the Church’s halls, and to fail is to die. But if she survives to initiation, Mia will be inducted among the chosen of the Lady of Blessed Murder, and one step closer to the only thing she desires.

I loved the first book enough that I couldn’t wait the extra month for Godsgrave to come out in paperback, and bought it in hardcover instead! I’d say I liked the first book better, but the second still only took me about three days to devour and I cannot wait to read the finale. Unfortunately, it looks like the third and final book of this series won’t be coming out until September 2019, so there’s a bit of a wait to read the ending (but at least nothing like the wait for the next George R R Martin or Patrick Rothfuss).

Fair warning, while the protagonist is a sixteen year old girl, she is also an assassin, and therefore the books are somewhat violent. They also cont

I’ve also just started on Ash and Quill by Rachel Caine, which is the third book in the Great Library series (the first is Ink and Bone, which you can find on our YA/Teen Fiction shelf), which rewrites history so that the Great Library of Alexandria never burned down and, as the keeper of all knowledge, is vastly powerful. It’s a fun premise and adds magic to the mix, so I’m definitely interested! Throw in a main character who loves books and I’m hooked. It sounds like there will be five books total in this YA series (the fourth comes out this summer), and I’m interested to see whether this series will continue to hold my attention until the end.

What I’ve been rereading (as I am very much a re-reader of books I enjoyed):

I was recently back home to Canada for a visit, where I reread a few childhood favourites, namely The Circle of Magic and The Circle Opens series by Tamora Pierce. While also fantasy, these books are decidedly children’s/YA literature, with 10 year old protagonists in the first series, who are 14 in the second. Tamora Pierce is known for writing strong female protagonists, and I highly recommend all of her books. I happily discovered that there is a third series set in this universe that I haven’t read (probably because they were coming out when I was finishing high school and into university, with the fourth not yet published), however some of the books seem to be out of print, so it might be a bit before I can get my hands on copies of them.

I’m also rereading Oathbringer by Brandon Sanderson (not for the first time…), which coincides with the tor.com reread. The third book in the Stormlight Archive series, it’s one of my all-time favourites. I’m not looking forward to the 20-year wait for the next seven books to come out…

Hope you’re all enjoying some sun and finding time to read!